A good rifle scope – including a spotting scope and a red dot sight – takes mediocre shooters to legitimate shooters (and just may become the most valuable piece of equipment you own!). They can help improve your accuracy and focus while you are out on a hunt, or hitting long-distance targets at the range. They are incredibly useful, but rifle scopes can be somewhat confusing if you have never used one.

To help you understand how to choose the appropriate rifle scope for your needs, we are going to explain what the numbers on the rifle scope tell you about the size of the lens within that scope, and what its magnification capabilities are. If you’ve ever been curious about what these numbers mean, you have come to the right place!

So, What Do the Numbers on a Rifle Scope Actually Mean?

The first number you will see printed on a scope, or labeled on the packaging that it came in, is its magnification power.

For example, if the current scope has the numbers 4 X 32 printed on the side of it, it means that the scope is capable of magnifying images by four times what you would see if you looked at it with your naked eye.

On the other hand, the numbers 6 X 32 printed on the side of a scope would indicate that the scope had a magnification power of six times what is possible with the human eye.

What if a Scope Lists Multiple Numbers? 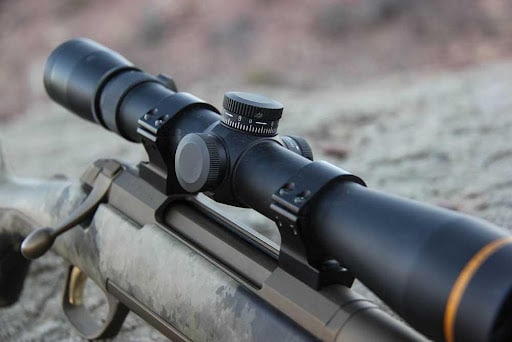 If you are looking at a scope that has a range of numbers printed on it (e.g., 4 – 12 X 32), it means that the scope is equipped with variable magnification capabilities, including magnification increases. Generally speaking, users select the magnification that meets their needs by simply turning scope rings on the exterior.

For example, a scope listed as 4 – 12 x 32 means that it could magnify between four and 12 times you’d be able to see with the naked eye.

This is incredibly useful if you are planning to use a single scope to hit long, medium, or short range targets. This type of variability is often needed for hunting in different types of environments. For example, if you were out deer hunting, you may spot one a ways off, and as a result, you’d need to adjust your scope’s magnification to see further out in order to acquire the target more easily.

Vice versa, if you were in a blind or hide and a deer came up on you at a much closer distance, you’d need to be able to reduce the magnification to sight that closer-range target.

What Does the Second Number on a Scope Mean?

Now that you know what the first rifle scope numbers mean, let’s discuss what the second number means.t

The second number on a scope indicates the size (in millimeters) of the adjustable objective lens diameter. Because of this, the abbreviation for millimeters (i.e., mm) often follows the last number listed on the scope details.

What Does This All Mean When You are Shopping for a New Scope?

When you are shopping for a new rifle scope, you’ll want to choose one that offers the magnification power that you’ll be using it for the most. Just because a scope can magnify an image to a greater degree does not necessarily mean that it is a better scope or the one you should pick.

Think about the specific types of targets that you will be aiming at. For example, if you only take your rifle to a range and the targets there are located relatively close to where you normally shoot from, you don’t need a powerful scope that can magnify images by six and nine times what you can view with your eye. Instead, you’d be able to get by with a scope that has 3x magnification.

It’s also important to point out that the more magnified an image is, the brighter it will appear in your scope. For example, a scope outfitted with a 50 mm lens will produce brighter images than a 32 mm lens. As a result, scopes with bigger lenses also cost more. They also weigh more, which may be a consideration if you are hoping to keep your setup lightweight.

Depending on your needs, a more expensive scope with better magnification power and brighter images might not be worth paying extra for. Scopes can get really expensive, so there is no sense in blowing your budget on a scope that you don’t actually need.

Again, choose the scope that actually is going to work best for what you’ll be using it for, rather than the one with the most impressive capabilities and specifications.

Everybody has to start somewhere. We encourage you to constantly seek out new information so that you can continue to become a more experienced gun owner. If you have the opportunity, try out different scopes at your local range, or even your local firearms supply store. Most people in the sport love to share their knowledge with beginners and fellow enthusiasts!

Don’t forget that the quality and magnification capabilities of your scope mean nothing if it’s not adjusted and sighted in properly, so you should always take the time get the setup right on the front end. Mounting your scope properly to your rifle also creates confidence and ensures you’re going out with the best possible setup — which normally leads to a great time!

The more familiar you are with your equipment, the better you will be at using it!